My name is Shery… I have actually been here for, I started in Las Lunas where I lived with my family until they kick me out. The reason why I became homeless is because I fell in love with my son’s dad. I’ve been with his dad for almost three years in August. We’ve been trying to come up with housing but seems likes nobody really wants, like certain places don’t want to help very much when you don’t have kids or you’re not disabled or you’re not any of these bad things, drunk problems, stuff like that. Everybody thinks the reason why people become homeless is because they’re on drugs or alcohol. The only reason why I became homeless was because of love. Love is crazy bad.

Most experiences I’ve had…some are good some are bad. You get to know who are your real friends and who are your fake friends. And that’s usually what happens is you find out who really has your back and who doesn’t have your back. There’s people out there that …are our true friends and they would do anything for us if we asked them to. They let us stay at their place, they make sure that we have food and stuff like that and when things happen. And those are your true friends. The ones that say “hey we’ll help you out if you come over”. But when you ask them “hey can I come over?”, “no sorry we’re busy”, those are your fake friends that you know that all they really wanted you was for either drugs or money or whatever you don’t have. Well, I come out here and make money but most of my money always goes to food or making sure we have a place to stay, shelter. Well now with the little guy I have to make sure he has diapers and things that I didn’t have to worry about till after I had him. [My son’s] name is Aiden, he’s two months. I had him Nov. 22nd at 6:13 in the morning.

I used to live in Clinton Iowa, and people always tell me “why don’t you just come back to Clinton Iowa” because everybody up there are my true friends and they are the ones that would actually help and find with me being pregnant. They would have actually been there to give us a shelter, stuff like that. But I moved with my parents up here. And then I had jobs. I worked and stuff. And when I first got here, in Los Lunas, and was there for two to three years and then been here for five years, so all together it’s like “ugh I hate this town haha”. It seems like nobody wants to help but if they do help they say “why are you out here?” “You’re on drugs.” They assume. And it’s like, do you ever talk to that person and ask them why they are on the streets? Because there are reasons why people are on the streets. There are the drunks, there’s the ones that don’t want to go get a place. Me, I want to get a place just for him. But I want the stability before I do go get a job. I have everything, and I can go get one….. 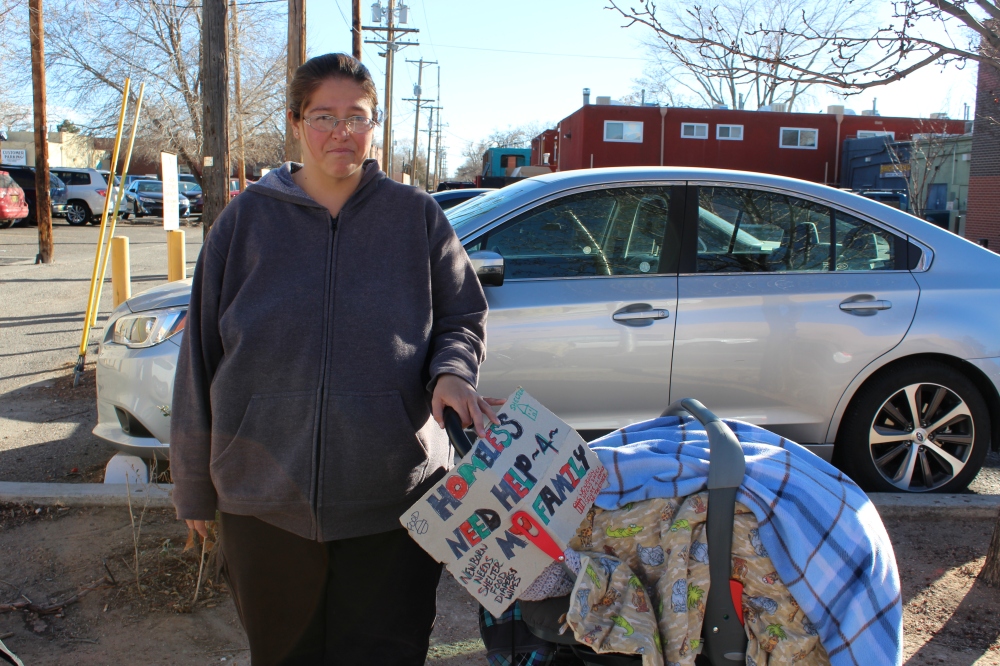