I am 19 years old. I go to UNM, the University of New Mexico. I am studying criminology and I grew up in Albuquerque, New Mexico since I was a baby.

They wanted to go to the United States ’cause they believed that they would have a better life, they would have more freedom, they would get better jobs, and it would just be better for them if they came to the United States. But they were sent to Albuquerque because, during their escape, when they were in the refugee camp, um, the people that were in charge to send people to different states sent them to Albuquerque, New Mexico.

My mom, when she was 13, my grandma and uncle were holding her in a basket, carrying her to a boat because the Vietnam communists would kill my mom if they found out that she was escaping on a boat to go to America. So, once she got on the boat, she traveled on the boat for three days with like, very little food. And then they got to, they got to, Malaysia. She got to Malaysia. She stayed there for—a Malaysia refu— refugee camp—and then she stayed there for like a year and a half learning how to farm, to sew, and like learn English. And then once that happened she had to sign all of these papers to go on a boat to America. So, when she was on that boat she got to America, and then—but no, they sent her to New Mexico. To Albuquerque. And then my dad, he escaped when he was—they made him go in the war during—when he was 17. But then he escaped during the war. Like, he was supposed to fight, but he was, he just like escaped. He ran away and he went on [a]* boat. He went to a refugee camp, I’m not sure which country, and then he was sent to Albuquerque.

My, my dad when he got to Albuquerque, he did not know much English and he didn’t know how the people were when he was living in his apartment and the people round his apartment stole his vegetables. Like, when he was gardening. Like he gardened and they just stole [them.]* And then my mom, she didn’t have any problems. She just went to high school and she went to work and then she just went back to her uncle’s house in Albuquerque.

When I was in middle school I did experience discrimination. Like, I was going to borrow the school’s phone to call my mom so she could pick me up and the white lady said “no, I’m sorry. You can’t use this, you can’t use this phone.” And I’m like “why? Like, I have to call my mom so she can pick me up” and she was like “no, you can’t use this phone because it’s the school’s phone.” And then I was like “okay, it’s okay.” So, I was gonna go to my friend to use her phone. Right, right when I like walked away, I saw this white boy walked up and he, he asked if he could use the phone and she let him, like, right away.

And then I also experienced like a lot of my English teachers would ask me in middle school… my seventh ­grade English teacher wouldn’t let me go to the bathroom when I asked, but she would let other kids go. And then in high school, my English teacher asked me if I knew English ’cause she like, said my English wasn’t good and yeah.

On Saturdays, I go to a Vietnamese mass, so I see a lot of people of my own culture. I know that there’s like a lot of different races that live here, but I always just see like, my own people. Like, especially like a lot of Vietnamese people they do nails. And like, they do hair. So I always ask my friends “oh, where did you get your nails done? Was it from a Vietnamese woman or a Vietnamese man?” and they’re always like “yeah.” 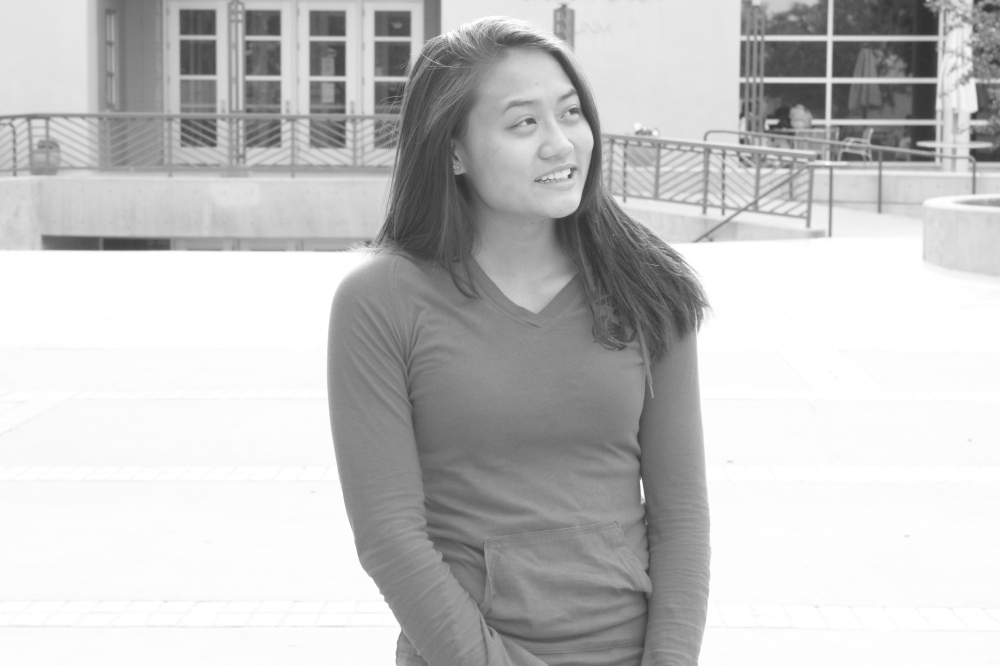 So, my dad, when he got to Albuquerque he didn’t know English at all, but he had, well, he did know a few words when he was at the camp, but he had to learn more. So he just started watching tv and he went to TVI to learn more English and my mom, she went to high school, so that’s how she learned how to speak. And then when they had my sister—she’s older than me—my older sister, she went to school, learned how to speak English. And then when they had me, like, I just learned from my sister, my parents, and my older cousins. And at preschool. So I was pretty lucky because my sister knew English already.

She (mother) went to Highland high school. So, she went to high school in Albuquerque.

I am going to UNM, the University of New Mexico. I’m studying criminology. I might finish my pre­requisites for pharmacy just because [I have enough time to.]* I got a few college credits when I was in high school, so I was pretty ahead when I got to UNM. So, I might stay like, another two years to finish my prereqs for pharmacy, just in case if I ever wanna try pharmacy school out. And I’m also going to work. I’m working at the Albuquerque Job Corps and I just help the students, like if they ever need help in tutoring, like math, science and English, and I opened a military fitness class so some students, they work out with me. And then I’m gonna open a dance class for them.

In high school, I got my associate’s degree in criminology so if I wanted to graduate—get my bachelor’s at UNM—I would finish this December 2016, but I don’t think I want to finish that early so I’m gonna take some pharmacy pre­requisites to see how I like it.

When I was young, like, I always wanted to help my parents, like, when I’m older. So, I thought like college was the key to everything. So I pushed myself to like go to college and make it to college and hopefully finish college.

My dad makes jewelry. So, like, turquoise. He makes, um, rings out of them. Earrings, anything. And sometimes I help my dad with the jewelry, like, I just help him put the ear wires on the earrings and then I [help]* him put the hooks on the necklaces, so he does stuff like that. He does molding and casting. And then his boss ships them off to get them sold or something. And then my mom she stays home sometimes and she goes to my [aunt’s]* shop to help out. So, um, she does alterations with my aunt. It’s called “Kim’s Alterations” if you ever want to get your clothes done.

Both of my parents, they, they’re known as “boat people” because they escaped, they escaped Vietnam by boat because of the war. Like the communists between North Vietnam and South Vietnam. The North [was]* trying to invade South Vietnam to steal the land, and it was really, like, harsh during that time. So, my parents escaped to go to the United States because they believed that they would have a better life and they will have a better job and all this kind of stuff. So, once they got to the United States in Albuquerque, it wasn’t what they expected. Like, they had to work. They had to find a job to support themselves, my dad worked on jewelry. So he worked on jewelry so he could pay for rent. And then my mom worked at a contact place where she [checked the contacts to see] if they [were] like sanitized or ready to go and get shipped off. So, she did that, she worked 40 hours a week. Yeah, she worked full­time while going to high school. She did that because her uncle didn’t support her. Her uncle only gave her five bucks every year. Every year. So, after graduating high school, my mom worked at a jewelry company where my dad was and my dad was the boss of that company and she was just a worker. And so, they met and they got married, and— she and him bought a house. They started to live their life because my dad after he worked part­time at that jewelry company when he came to America, he grew in his position so he started to become a manager and then after manager, he owned it. So, he was making—he was very blessed. He made, like, a lot of money, but after like ten years, they [went] bankrupt and then so now my dad just works at a jewelry place and my mom sews or stays home.

My goals [are] to get a good job—I’m not really sure yet ’cause, if I do continue with criminology, I want to do, like, FBI work or social [work.] So that’s like one of my goals, is to become a social worker. If that doesn’t work out because of—I don’t know how I will pay for the master’s degree, thenafter my bachelor’s degree, I’ll just go become a cop.

If I could move somewhere else, I would move to, probably, California. I would move to California, maybe in the Northside. I would move there ‘cause I’ve lived here for so long in New Mexico, there’s like, no water. It’s like so dry. So I would like to live, like, more next to the beach, or—

So I wanna do social work and or become an F—something in the FBI or maybe a cop or something. But I want to help people. And, to be remembered—like, I’m helping people right now at the Albuquerque Job Corps and people, they look up to me already. Like, they are already asking me, “how do I do this, how do I do that?” And I help them. I want to be remembered as a helpful and inspirational person. I inspire others to do—to improve their life and do better for themselves. 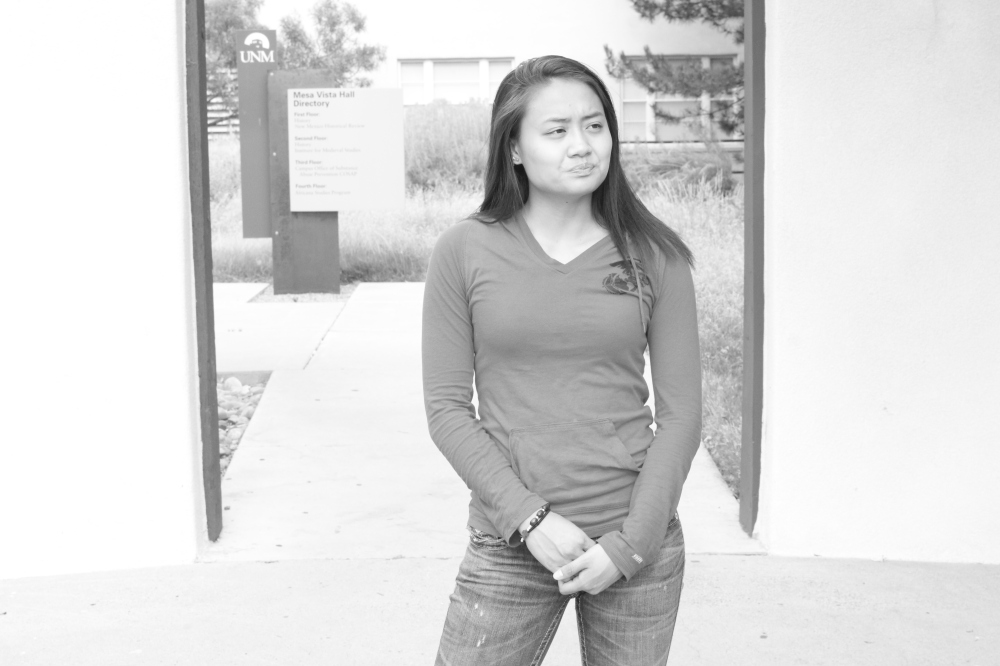